As founder of MWM Graphics, Moore dubbed his digital abstract style ‘Vectorfunk’ early in his career, and has since employed it to cover surfaces ranging from Ray-Ban Wayfarers to Almond Surfboards; an Apple Desktop, Coca-Cola’s London Olympics Campaign, and an entire issue of Wired Magazine.

The Murray Street roof is an extension of his signature faceted graphic wall treatments, creating an optical layer of jewel-like lines and intricate intersections of colour. Delivering a range of colour options, including eye-popping complimentary colours punctuated by reflective hairline strips, to create energy and dynamism during the day and at night.

Located in on Murray St Mall, between The Aviary and Cotton On, above Forever New. 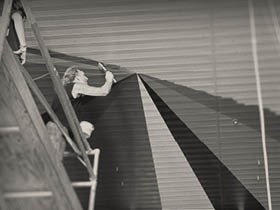